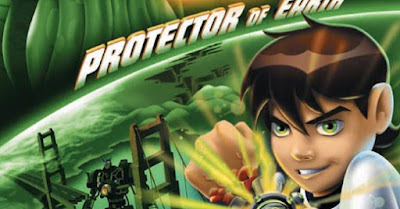 Ben 10: Protector of Earth is a video game based on the American animated television series Ben 10. This is the first Ben 10 game and it was released for PSP, PS2, the Nintendo DS and the Nintendo Wii in October–November 2007.

At the start of the game, a mosquito-like drone extracts much of the DNA from the Omnitrix, leaving only Four Arms and Heatblast on the watch. Ben finds that the stolen DNA is being used to energize and power various robots in the form of Omnitrix Crystals, and in destroying these robots he regains some of his alien forms.

Ben later finds Vilgax's robot drones and the Forever Knights fighting. Enoch is building a mech using technology from Area 51 in an attempt to stop Vilgax; and though he is also trying to save the world, he isn't willing to let the Tennysons help. By defeating Enoch's mech, Ben acquires another Omnitrix crystal, unlocking XLR8 by defeating a Vilgax mech and after defeating Enoch's mech, Cannonbolt.

In San Francisco, Ben learns that Kevin 11 escaped from the Null Void and brought some plant creatures along. Kevin 11 kidnaps Max and escapes to the crater lake, where Ben defeats him. Kevin 11 is then drawn in the Null Void again. Ben tracks down and defeats the mother plant in Seattle. He gets another crystal and unlocks Wildvine.