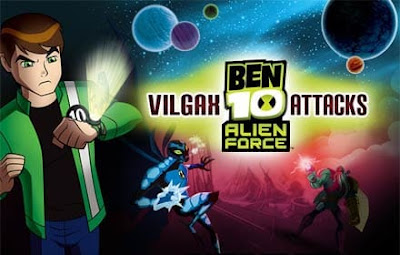 For the most part, gameplay across the seven included worlds is a balance of action and puzzle-solving that revolves around the skills of Ben's alien forms. For example, Ben might need to change into his Humungousaur form to break through doors, or use his Swampfire form to ignite flammable substances. Each form has different combinations and special attacks that it can execute, and Ben can unlock new abilities by defeating enemies and collecting glowing energy orbs. However, there is one gameplay element that players should be aware of: using a form's innate abilities drains energy from Ben's Omnitrix meter, preventing them from continually being used until the meter can recharge. As a result, players will need to focus on combos and save their special attacks for finishing blows instead of constantly wielding them in battle.

When Vilgax invades the Earth using a Null Void projector (which beams Null Void prisoners to Earth), Ben, Gwen, and Kevin, snap into action to defend their hometown Bellwood from the attacks. Splitting up, Ben battles Vilgax's servant Psyphon, who brings a Mr. Smoothy billboard to life to attack Ben. Ben ends up using most of his Omnitrix aliens to defeat it, but ends up draining the watch's power as a result. Azmuth, creator of the Omnitrix, appears and tells him that the Omnitrix must recharge before he'll have access to all of his aliens again, leaving Ben with only Swampfire, Humungousaur, Cannonbolt, Big Chill, and Spidermonkey. Gwen and Kevin show up, along with Professor Paradox, who teleports the gang back to the past to stop Vilgax's plan before it happens. Paradox gives the trio a message from Grandpa Max, who directs them to the planet Vulpin, home of Wildmutt, one of Ben's original aliens. Ben calls upon the Galvanic Mechomorph Ship to aid them.