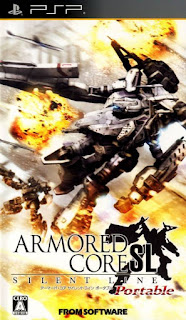 
Set in a post-apocalyptic future, Armored Core 3 depicts a world where mankind has begun to live underneath the Earth's surface after a catastrophic global nuclear war broke out on the surface. The human beings who survived formed a subterranean society called "Layered". Layered is ruled by an artificial intelligence known as "The Controller", which dictates almost everything that happens in the world. The two major corporations, Mirage and Crest Industries, and a relatively more minor one, Kisaragi, all vie for dominance and control over the land and assets in Layered. However, not all is right with The Controller, and odd events are becoming more and more common. With the number and scope of these errors, some might even go so far as to suggest that the logic system is failing...

Many players were confused with the nature of Armored Core 3's storyline in relation to previous AC games. At the end of Another Age, the AC world appeared to be getting back on its feet after the conflicts of the subterranean era (Armored Core, Project Phantasma, Master of Arena) and the Mars crisis (Armored Core 2). However, when Armored Core 3 begins mankind is back in a subterranean city hiding from the effects of a catastrophic global nuclear war.


Two prominent theories have arisen to explain away this discrepancy. Either the game is set in the same world as the previous games and the world experienced a second "Great Destruction", or Armored Core 3 reboots the series' storyline and starts all over again from a similar starting point as the original Armored Core. The latter appears to be true.

Two different timelines were mentioned in the Armored Core 10 works complete file,[1] one of which refers to original Armored Core and continues up to the end of Armored Core 2: Another Age. The other timeline starts with Armored Core 3, ending in Armored Core: Last Raven. The roots of Armored Core 3 began with the humanity taking refuge in underground cities after a large scale disaster occurred on the planet's surface. Centuries after that great destruction, corporations such as Mirage and Crest were established. They paved the way for the development of the first MT prototype, the XMT-01, which soon led to the development of ACs and other MTs.