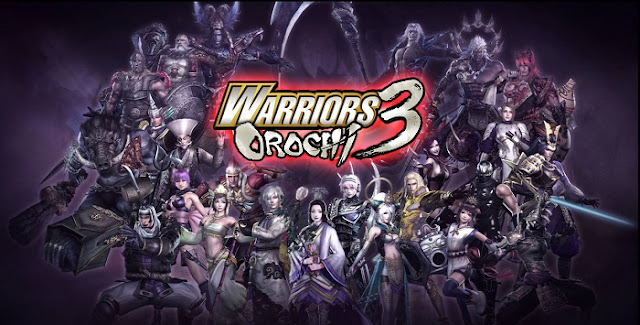 Warriors Orochi 3, originally released as Musō Orochi 2 in Japan, is a 2011 hack and slash video game developed by Tecmo Koei and Omega Force for the PlayStation 3 and Xbox 360. This is the fourth installment of the crossover series Warriors Orochi, a combination of the Dynasty Warriors and Samurai Warriors series. This installment serves as a sequel to Warriors Orochi 2. The game was released in Japan on December 22, 2011, in Europe on April 6, 2012, and in North America on March 20, 2012 (PlayStation 3), and March 27, 2012 (Xbox 360).

There are two ports of the game: Musou Orochi 2 Special, released on July 19, 2012 for PlayStation Portable exclusively in Japan, and Warriors Orochi 3 Hyper, which was released as a launch title for the Wii U for Japan, North America, and Europe. An updated version, Warriors Orochi 3 Ultimate (Musou Orochi 2 Ultimate), was released for the PlayStation 3 and PlayStation Vita in Japan on September 26, 2013 with PlayStation 4 and Xbox One ports released on June 26 and September 4, 2014, respectively. The four ports were also released in North America and Europe on September 2 and 5, 2014, respectively. An additional port for Nintendo Switch is scheduled for a November 9, 2017 release date to commemorate Omega Force's 20th anniversary.

Gameplay takes place on modified versions of stages taken primarily from Dynasty Warriors 7 or Samurai Warriors 3 (in addition, some downloadable content and story elements in Ultimate take place in stages taken from Warriors Orochi 2); a select number of stages relevant to the story are new stages. Each of the new "collaboration characters" (Ryu Hayabusa, Ayane, Joan of Arc, Nemea, Achilles, Rachel, Momiji, Kasumi, Sterkenburg, and Sophitia) is also associated with a stage taken from either Dynasty Warriors 7 or Samurai Warriors 3, with graphical modifications made to resemble their game of origin. Much of the stage music is taken from earlier Dynasty Warriors, Samurai Warriors, or Warriors Orochi games; each of the collaboration characters is also associated with a unique theme.