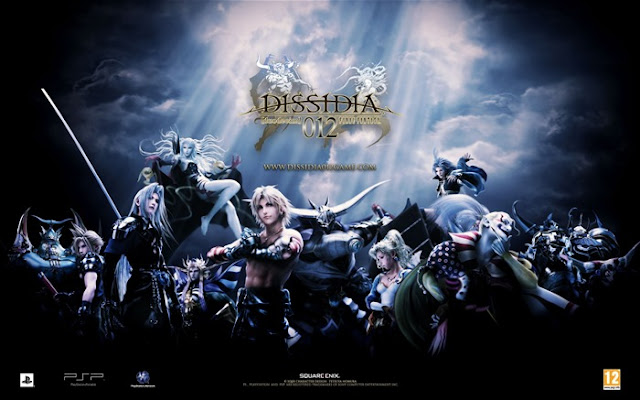 Dissidia 012 Final Fantasy  is a 2011 fighting game published by Square Enix for the PlayStation Portable as part of the Final Fantasy series. It was developed by the company's 1st Production Department and released in Japan on March 3, 2011. The game is both a prequel and remake of Dissidia Final Fantasy, revealing what occurred before the events of its predecessor, and was released on March 22, 2011 in North America.

The game initially focuses on the twelfth war between the gods Chaos and Cosmos who have summoned several warriors from parallel worlds to fight for them. Upon ending the twelfth cycle, the game remakes the thirteenth war from the original Dissidia Final Fantasy and adds multiple sidestories. Fights in Dissidia 012 were given the ability to counteract enemies' strongest attacks by using assisting characters, while navigation is now done through a traditional-styled Final Fantasy world map.

Development of the game started in August 2009 with the Square staff wishing to improve the gameplay from the first game to provide players with more entertaining features as well as balance several parts. Dissidia 012 has been well received, with publications calling it one of the best PlayStation Portable games.


Gameplay is largely reminiscent of Dissidia Final Fantasy along with a few changes. The game consists primarily of one-on-one battles, taking place on what is known as a battle map where the two characters duel. Players are able to perform two types of attacks: a Bravery attack and an HP attack. Both characters start with a set amount of Bravery points, the number of Bravery points being equivalent to the amount of damage dealt by an HP attack. Thus, the player must perform several Bravery attacks to steal Bravery points from the opponent so as to increase the power of their HP attack, as Bravery attacks do not cause any damage.