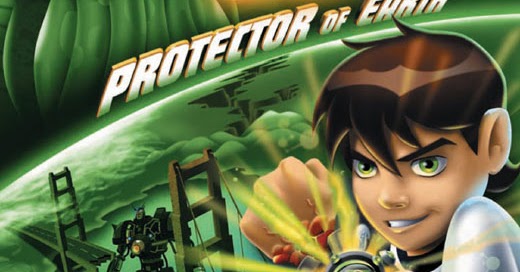 Ben 10: Protector of Earth is a video game based on the American animated television series Ben 10. This is the first Ben 10 game and it was released for PSP, PS2, the Nintendo DS and the Nintendo Wii.

While sleeping near the Grand Canyon, a mosquito-like drone sucks most of the DNA of Ben's Omnitrix. A giant object crashes into the mountains, and Ben finds out he can't transform into some of his aliens, only Heatblast and Four Arms. After fighting through multiple drones, he defeats a Giant Mech Drone and finds an Omnitrix Crystal which gives him access to XLR8.
Later, they go to Mesa Verde and find Vilgax's Drones and Forever Knights fighting. After defeating all the knights and drones, the Tennysons ask an injured Forever Knight about Enoch. He says that Enoch has used all the Technology of Area 51 to make a Big Battlebot to fight Ben. They go to Area 51 and fight Enoch, but Enoch recovers and climbs his battlebot. They think of some hydro-electric place where the Battle Bot is comfortable to fight, and Gwen thinks it is Hoover Dam. They head to Hoover Dam and fight the Battle-Bot. Then Ben finds another Omnitrix Crystal which regains access to Cannonbolt.


In the beginning, Ben can stay an alien for a limited amount of time, but after defeating some bosses, Ben unlocks more powers for his aliens and even unlocks the master control, meaning he can stay alien for an infinite amount of time or switch between aliens without draining Omnitrix energy. Attack combos can be unlocked collecting Omnitrix points. Limited power boosts or invincibility can be gathered, as well as bonuses to make the Omnitrix recharge faster. Three Sumo Slammer cards are hidden in each main level, and once collected unlock features, such as movie clips.

After each level, Plumber ranks are rewarded, depending on how fast the player beats that level. If the player gets an A rank, you get a character view, usually a boss or a villain. In the main boss levels, a quick time event similar to those of God of War allows players to execute a special attack at certain points.