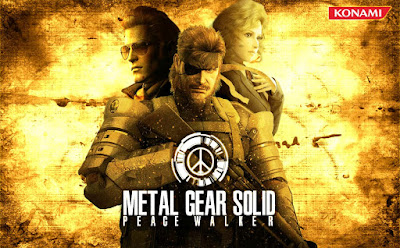 Metal Gear Solid: Peace Walker is an action-adventure stealth video game developed by Kojima Productions and published by Konami for the PlayStation Portable in 2010. It is the seventh Metal Gear game written, directed, and designed by Hideo Kojima, as well as the second action-based Metal Gear title made specifically for the PSP, following Metal Gear Solid: Portable Ops;[b] it was later released for the PlayStation 3 and Xbox 360 as part of the Metal Gear Solid HD Collection in North America and Europe and as a stand-alone retail release in Japan. This is the first title in the series to alter the traditional tagline "Tactical Espionage Action" to "Tactical Espionage Operations", referring to the base building and mission mechanics of the game.

Peace Walker received critical acclaim, becoming the 3rd highest rated PSP game on Metacritic, and is often ranked as one of the best PlayStation Portable games by major gaming publications.

Peace Walker consists of two primary gameplay modes: "Mission" and "Mother Base". "Mission" are the actual action sequences of the game, where the player must infiltrate an enemy territory or fight a boss, whereas "Mother Base" is an army management mode similar to the briefing screen in Portable Ops.

Players get to choose which missions to play from the "Mission Selector" screen. There are two main types of Missions: Main Ops are the primary story-based missions in which goals are determined by the narrative and must be played in a strict order in order to proceed. Some Main Ops missions include illustrated cutscenes that involve bits of interactivity in order to proceed. Extra Ops are optional missions that involve much more elaborate goals ranging from simple target practices to obtaining secret documents.

The game adopts certain play mechanics from Metal Gear Solid 4, such as the crouching walk, the over-the-shoulder shooting view, the CQC system, and the ability to search held-up soldiers. The truck from Portable Ops, where players can bring subdued enemies for recruitment, has been discarded in favor of the Fulton Recovery System, which players attach to subdued soldiers and prisoners. The Wi-Fi recruitment system from Portable Ops has been modified so that instead of tapping the Circle button to obtain a strong enough signal from an access point, the player will have to knockout soldiers using CQC to accept them. The cardboard box used to hide from enemy soldiers is now available in two-man versions called Love Boxes, which have different variants. The Surround Indicator in Portable Ops can also be used only when it is equipped in the item box and players will also develop and use an early version of the Soliton radar system from the original Metal Gear Solid. The game features the camouflage index system from Snake Eater, but the player does not have the ability to change camouflage uniforms during a mission as the point index will be entirely based on movement, position, and the size of the weapon equipped in the weapon box. The player can also use marking devices to call in artillery strikes or resupply drops.